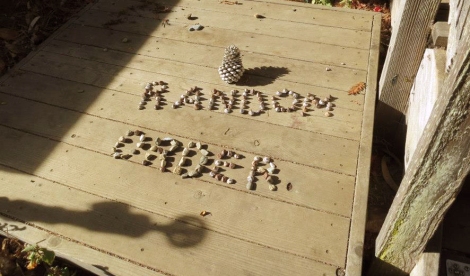 Once on the coast of the Pacific Ocean in California, I happened by a message from a stranger.

I used to joke it wasn’t Friday we should be worried about, but instead Monday the 13th. The only thing worse than an unlucky Friday was an unlucky Monday, when problems would rush in and flavor an entire week.

I watch for omens. I believe in signs. When the stars align, I stand in awe – trying to translate the subtle changes in nature to the forces taking hold in my own life.

For the longest time, I was convinced my suspicion of ill-fated numbers, like 13 and 6 in triple digits, was completely justified. The belief that these numbers bore the misfortune of urban legend cemented in my mind, when two of the children I loved most in this world died at the tender age of 13.

Then I picked up a book – a novel with an intimidating number of pages – written by Don DeLillo. The novel, titled Underworld, offered a deep and dark lens into realms of human existence that aren’t easily accessible to the average person. I found the story problems appalling and the lyrical prose enchanting. Against an initial visceral reaction, I was transfixed.

Eagerly, I flipped through the pages of the novel, consuming the twisted confusion of the characters and reading to the end in record time. Then I marked the pages where, in the author’s own words, the numbers added up to 13. I even referenced this remarkable technique in a poem I wrote later on, entitled “Letter to Don DeLillo.”

During that time, something changed in my life. I started to notice numbers more, in every corner of my existence.

I noticed how 13, and the multiples of 13, would collide with curious coincidences. The phone would ring with good news on the 13th. An extraordinary opportunity would come knocking on the 26th. The numeral 6 would ring up on the register in double and triple digits, making me look twice. In both symbolic and non-symbolic ways, 69 would fling its flirtations my way, not unlike my college days.

An Affair with Unlucky Numbers

At first, I mused that my luck had gone awry, and my fortunes had become misguided. I worried I was trapped in a labyrinth that was stranger than fiction. I tried to fight it, turn my back, bury the face of the digital clock – lest paranoia take the place of unfaltering optimism. But it didn’t work.

Intrigued, I decided to embrace these odd omens.

They were just numbers, after all. Maybe my time engrossed in vivid and surreal fiction had made me hypersensitive. If I accepted this as sheer coincidence or random order, maybe these numerals would fall back in to the mediocre march of distance, money, and time. That didn’t happen. Instead, unlucky numbers started appearing in more prominent ways. So, I watched with curiosity, as they marked milestones in my writing, my artistic pursuits, and my life.

Once an omen of bad luck, the digits transformed into a sign of good fortune. They marked finished pages of fiction, art exhibits, publishing contracts, and opportunities for personal growth. Now and then, they even offered a fresh start. To this day, the storied numbers surface at the strangest of times.

Now, I relish the crossroads that are labeled with unlucky numbers. I stand open to the possibilities, eager to turn my luck around. 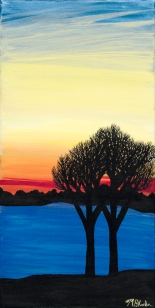 Seed of a New Beginning

My Tweets
This is a personal blog. Views expressed here represent my own, not those of my employer.
%d bloggers like this: